Case- We report a case of a 28 years old female who presented to her local General Hospital with confusion right ptosis, right INO and GCS of 7/15 diagnosed as tip of basilar syndrome and treated with IV TpA with good functional recovery

Discussion The case depicts the clinical signs and symptoms of a tip-of-basilar syndrome and, the importance of timely recanalization with IV TPA, which is shown to improve functional outcomes in acute basilar thrombosis

Identification of distinct clinical signs in acute stroke and, to establish their correlation with brain areas under and potential site of occlusion in acute basilar stroke.

Importance of prompt and timely revascularization therapy in acute basilar occlusion, leading to improve outcome in an otherwise catastrophic stroke emergency with significant morbidity and mortality with delayed or no treatment

e report a case of 28 years old female who presented to her local General Hospital with confusion, and GCS of 7/15. Patient was discovered by her Father to be in altered sensorium that morning. A selfie taken 14 mins before her discovery by her father, showed a right sided ptosis. The selfie also helped established her time of onset, as she remembered waking well prior to that, but then had no recollection of having taken the picture. Patient was therefore, brought in as acute Stroke call. Other examinations findings on arrival to Hospital were was a Right Inter-nuclear opthalmoplegia, Right ptosis, and GCS of 7/15.

CT Brain showed a hyper-dense basilar artery and Digital subtraction angiography of circle of Willis and carotids showed non-opacification of her distal basilar and origin of both posterior cerebral arteries (Figure 1). 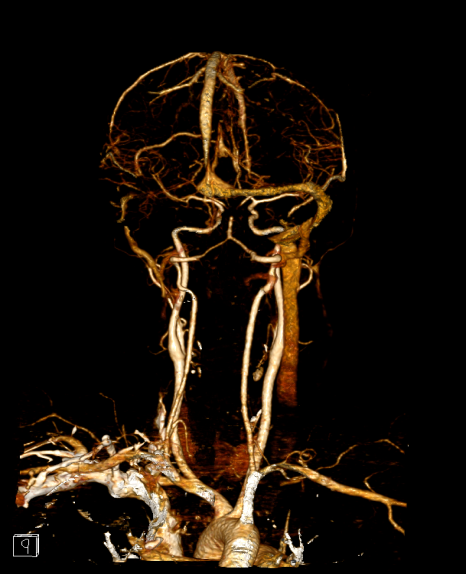 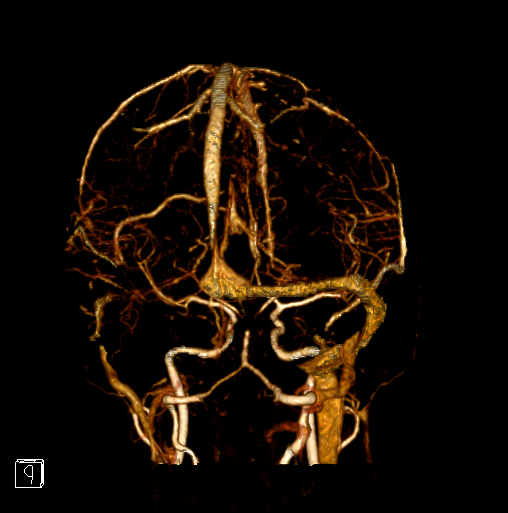 Patient was treated with IV TpA 3 hours after established onset and was, referred for Endovascular thrombectomy. On arrival to thrombectomy centre, she had a emergent MRI which showed acute infarction in anterior left thalamus, median right thalamus, Right paramedian midbrain and R occipital lobe, which would explain her deficits in consciousness (thalamus), Internuclear opthalmoplegia  and right ptosis(right paramedian midbrain). Her pons, medulla and cerebellum were spared which would be consistent with high/tip of basilar territory infarction (Figure 2).  Her interventional angiogram showed full recanalization of her basilar artery.  She was extubated in the next few hours and her NIHSS <12 hours post tpA, was 1. She made a great functional recovery. She was managed with dual antiplatelets therapy for 3 weeks followed by clopidogrel monotherapy. Her trans-oesophageal echocardiography revealed a Patent Foramen Ovale.

On 3 month follow up, she maintains an mRS of 0 with a right residual INO and is awaiting, thrombophilia screen and PFO closure consideration

Acute vertibulo-basilar thrombosis is associated with mortality of >85% mortality which is seen reduced to <40% with prompt recanalization. Good functional outcomes can be expected in as many as 24-35% of patients treated with IV or IA thrombolysis.

Tip-of-the-Basilar-artery-syndrome is manifestation of upper brainstem and diencephalic ischemia caused by occlusion of the rostral basilar artery. The most common cause is embolism. Common presentation is with altered sensorium, cranial nerve palsies, confusion and amnesia.  Motor weakness is very rarely observed. The syndrome if unrecognized can lead to severe disability.

The case depicts very well the clinical signs and symptoms of a said syndrome with cranial nerve palsy, altered sensorium and amnesia and somewhat typical lack of motor weakness. It also emphasizes the importance of timely recanalization with IV TPA, which prevented severe brain stem damage in such a young patient and, the need for endovascular re-canalisation. The case re-enforces the limited yet present evidence that TPA in time, is shown to improve both immediate and long-term functional outcomes in acute basilar thrombosis. The vital importance of establishing time of onset via the most non-conventional means (patient’ own picture) proved substantive and indicated the importance of establishing correct time of onset in acute stroke and specifically in acute basilar strokes

Also the importance of good clinical history, examination and clinical correlation of neurological deficits with areas under threat their timely recognition with appropriate imaging improved outcome in this particular case